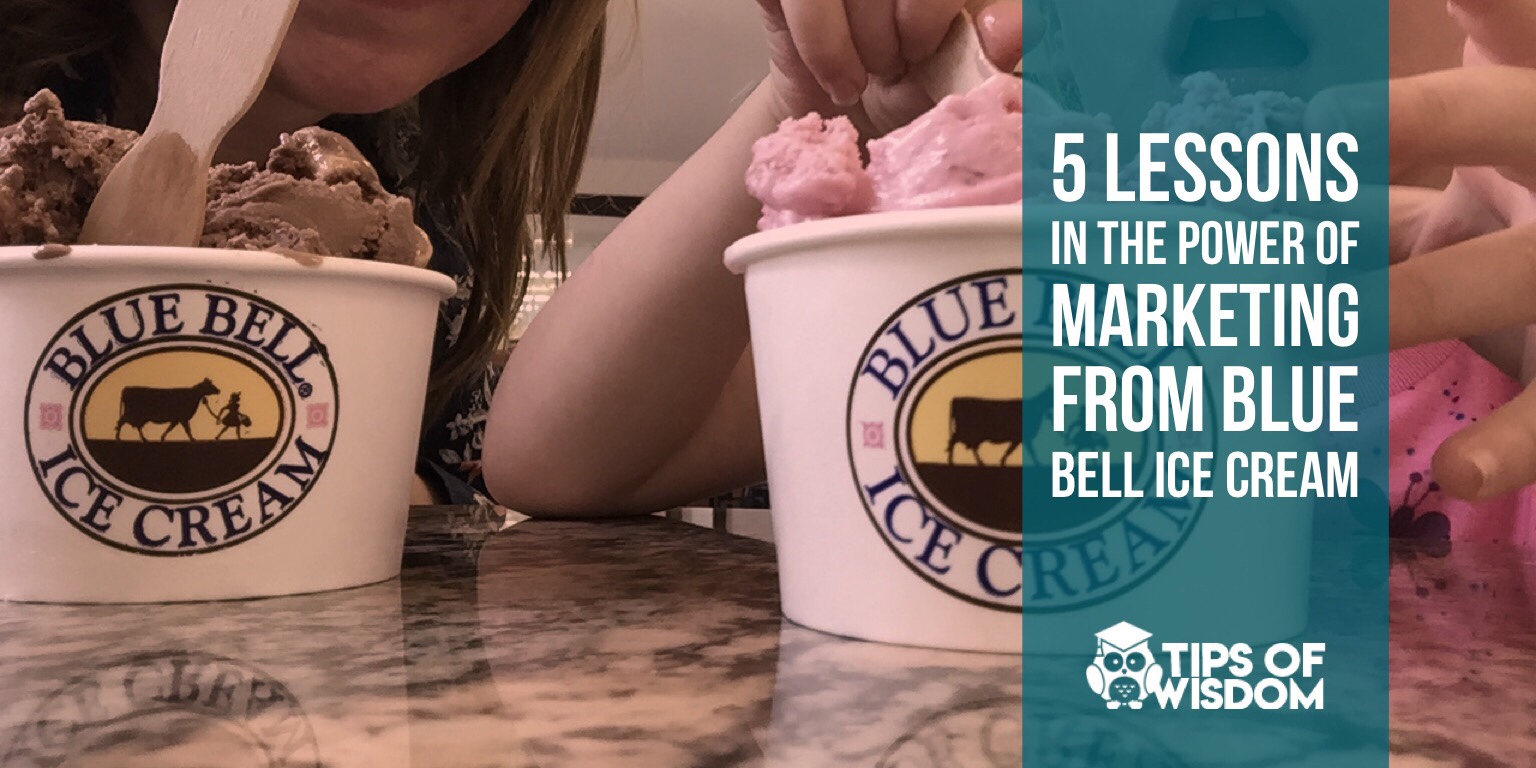 Growing up in Texas, one dessert stood out among all others … ice cream. But it wasn’t just any cartoon of ice cream on the table when it came time to top the peach cobbler with a sweat frozen treat on a hot summer day at our house. If my dad was going to be eating it, it had to be Blue Bell Homemade Vanilla Ice Cream.

In 2015, Blue Bell was thrust into the national spotlight when a listeria outbreak happened. It was pulled off the shelves at stores, and many people weren’t sure what was going to come of the iconic dessert. At one point, someone even attempted to sell a half consumed cartoon of Blue Bell ice cream for $10,000 on eBay, until the FDA stepped in and stopped the auction.

Luckily, for fans of the sugary treat, the company recovered, and the ice cream returned to store shelves.

As we toured the creamery, we asked our guide and other employees how the last three years had impacted the business. As we listened to them tell the story, I found five great lessons in marketing that other businesses can learn from, too.

1. Involve Customers in Your Process

Growing up, it was a big deal to tour the little creamery in Brenham, Texas. Whenever someone came to visit us from out of state (or out of country), we took them to see how ice cream was made. The tour has greatly changed since the listeria outbreak of 2015, but you can still watch how the ice cream is made from the observation deck. A tour guide will share with you answers to any question you may have about the history of the business or the process of making the creamy goodness.

The key is, anyone who is curious about Blue Bell can see how the ice cream is made. There is a transparency in inviting your customers in to view your assembly line. If you stay long enough, you’ll see that every 30 minutes employees rotate jobs. Not only does it breakup the monotony of a repetitive job, but it also ensures all employees are cross trained.

More importantly, if you stay long enough, you’ll ask questions that inspire you to fall in love with the company. By inviting customers in to meet their team and tour their production area, Blue Bell allows customers to become part of their process. It is an exercise in public relations that writes a brand story in a way advertising alone cannot.

2. Your Product is More Than a Product

As we sat eating our scoop of ice cream after visiting the observation deck, we spoke with a lady who had worked at Blue Bell for more than 18 years. We asked her how the listeria outbreak had impacted her. Unlike others who had been laid off during the shutdown, she had stayed at work answering phones and fulfilling a PR type role.

The real way the outbreak impacted her, however, was in the questions she heard people from outside of the Blue Bell family ask.

“It is more than ice cream,” she explained. “People just didn’t get that. They didn’t get the emotional connection people have with Blue Bell.”

She shared that every day people tell her stories from their youth that involve the South’s most iconic ice cream brand. For her, the thought of Blue Bell takes her back to her grandmother’s house, where she could always count on a scoop of ice cream in a cup of coffee.

It is that emotional connection to the brand that caused “Blue Bell Mania” when the ice cream was no longer available for purchase across the south. By creating emotional connections with their customers, Blue Bell has created raving fans. Those fans became instrumental in helping the company recover.

3. Your Employee’s Passion is Your Brand

As I pondered the conversations we had with the employees at Blue Bell, I realized how much they loved the company. In an era where it is not uncommon for people to change jobs every three years, we were told Blue Bell’s employee turnover is in the single digits.

“We are family owned, and we care about our employee’s families,” the tour guide explained. “Most departments only work 8-5, and our employees are off on the weekends.”

Our tour guide was born and raised in Brenham, going on his 9th year working for the company. His breadth of knowledge about what the company does was impressive, but his passion for how the company cares for employees was inspiring.

Just two months before the listeria outbreak in 2015 he had been promoted to head of the tours. When they reopened, the decision was made to stop the traditional tours, replacing them with an observation deck over part of the facility instead.

“We used to give VIP tours that could last several hours,” he explained with pride, as he began listing the various departments. “We have so much to see here. We have R&D, our own fabrication shop, 12 production lines, in-house marketing, and more.”

While the VIP tours and the tours of my youth no longer happen, by caring for their employees, the company has created brand ambassadors who are proud to share its story.

One of the reasons their employees are so passionate about the Blue Bell brand is because no matter the role they play, they know their management team is there to support them.

“Our former CEO, PK (Paul Kruse), used to come down every day about 3:30 and just sit among the customers and chat with them. He never let them know who he was. He just sat and listened, laughed, and talked,” explained the lady behind the counter servings scoops of ice cream. “If we were busy, he would step behind the counter and pick up a scoop to serve our customers, too. It didn’t matter that he was CEO, and they never knew it was the CEO who was serving them the ice cream.”

It is a tradition their new CEO has carried on, though maybe not always at 3:30 every day.

On their busiest day so far this year, more than 3400 people visited the observation deck and ice cream parlor in the span of about six hours.

“On days like that, our CEO will bring us drinks from Sonic,” explained the lady, as she shared how he goes out of his way to ensure his employees feel appreciated.

As an executive, it is important to remember that both your internal and external customers are your business. It doesn’t matter if you sell widgets or ice cream, by making time in your schedule daily or weekly to interact with your customers, you will stay in touch with the heart of your brand story.

5. Your Company Should Set the Standard

While it has been almost three years since the listeria stir, employees still get asked about it on a regular basis by guests.

“It was bad timing. The news didn’t have anything better to cover at the time, so we were the spotlight. Nothing like this had happened in our industry before, so we became the guinea pigs,” explained one of the employees. “We hired our own set of experts to look at our processes, and now we are setting the standard for others in our industry.”

Blue Bell was able to turn an unfortunate situation into a best-in-class company leading the industry in new and innovative safety practices. More importantly, they were able to educate their employees on how to answer the questions they knew visitors would ask about the bad press coverage they had received.

Almost three years after the outbreak that could have caused the company to close entirely, Blue Bell has recovered. They recently announced distribution again in three new states, along with plans to open a new distribution facility on the east coast.

Editor’s Note: Quotes in this article are paraphrased from conversations with employees and should not be considered direct quotations. 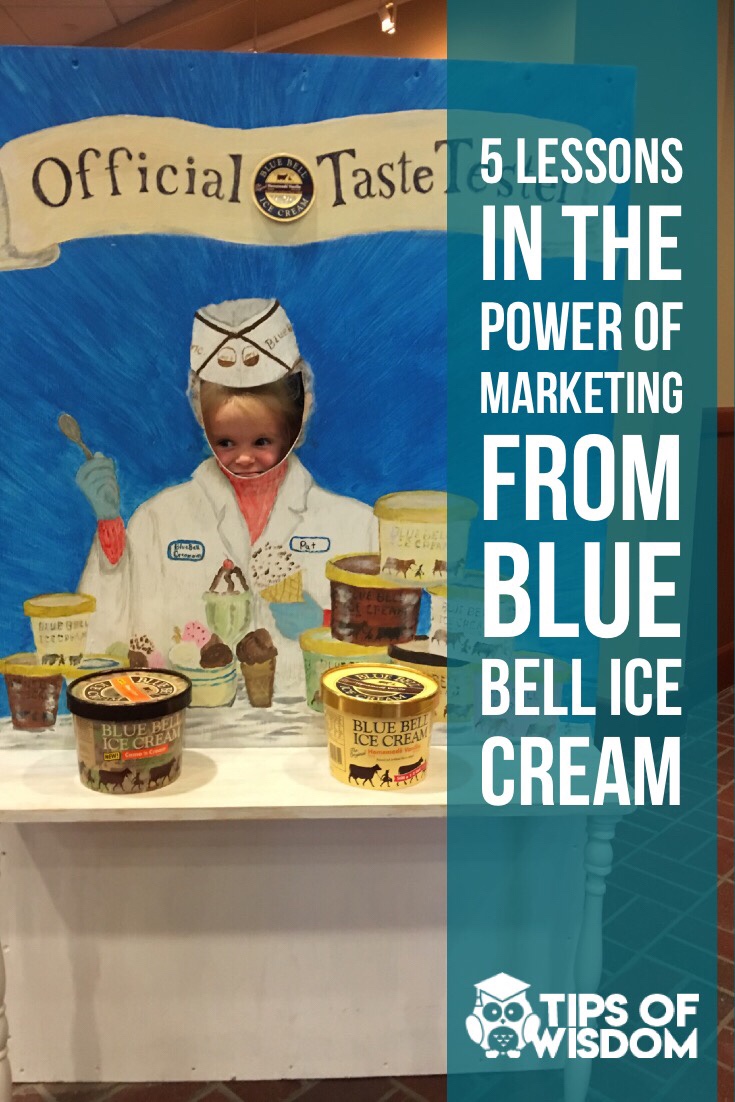