One of my all time favorite Helen Keller quotes about life reads, “When one door of happiness closes, another opens; but often we look so long at the closed door that we do not see the one which has been opened for us.”

I’m very fortunate. I’ve never lost a job. But I’ve also stayed in some jobs I would have left a lot sooner, had there just been an open door to walk through when I was ready to quit.

Scenario 1: No Doors to Knock On

As I pondered the above, I wondered how my life would have changed if I had just walked out the day a former boss who was 20 years my senior asked me to bring something down to his hotel room, and there he stood wrapped in only a towel as he answered the door. Sure I was 1600 miles away from home with nothing in the bank, but that wasn’t what made me stay. I stayed because it was a job, and I didn’t have another prospect career door lined up to knock on that would help me pay my bills. I looked and looked for months, but a new opportunity never came.

Then I thought about the time I was four months pregnant with extreme morning sickness. I was brought into my boss’s office for looking unprofessional at work and told I needed to start wearing makeup, something I had never done in my entire career. With my husband unemployed and looking for work, and a baby on the way, walking out on a paycheck wasn’t the option…no matter what my hormones were telling me. No matter how many new doors I knocked on looking for a change, I could not find one that would open. Forget the world of Equal Employment Opportunity … no one really wants to hire a pregnant woman. More importantly, when you’re pregnant, starting a new job with less than a year before your child is born means losing coverage under FMLA. So I stayed.

I have often wondered what would have happened if I would have left. Would I have found a new opportunity sooner because I would’ve put more effort into looking? Would I have been brave enough to attempt starting my own business? Who knows. Life is too short to spend looking back on “What Ifs” and “If only” moments.

What I do know is this. Life was not ready for me to open a new door. So I made the most of the situations I found myself in and I grew as a professional. I discovered what I wanted most out of a career and what I would never tolerate again. When the right door finally came along, I knew it was time to open it.

Tip #1: When a new door doesn’t present itself, don’t give up. Use the time you have to discover more about you as a professional and define the rules that will govern your next move.

Scenario 2: Walking Through the New Door

Next, I thought about the time I had been called in to the HR department and written up for failure to clock-in. The irony was all of my missed punches came because I had been working off the clock for at least an hour and was so enthralled with my work, I had failed to go punch in when I was allowed to. Less than two weeks after the writeup, I had landed an interview at a new company. Within a month, I had started my new job in a salaried position. That time, the door had opened when I needed it to, and I walked through it…leaving the world of missed punches behind me.

But what if I hadn’t left?

I had not left for more pay. In fact, I actually took a bit of a pay cut to jump into a salaried role where the world of time clocks was way behind me. I had also left a role behind where my creativity had been stifled and the opportunity to practice or learn new concepts was never presented.

Had I never walked through that door, I would have spent the next decade being content but completely unfulfilled in my career. I never would have learned how to grow a business from the ground up, how to fail and bounce back, and how to grow as a professional through constant and never ending improvement.

Almost a decade later, most of my former coworkers are still employed in their same roles. Some have advanced within the company. I probably would have advanced at some point, but I would have missed a million opportunities that presented themselves when I walked through a door to a different career.

Tip #2: When you find yourself in a career rut, don’t be afraid to seek out more challenging opportunities. Just make sure you know what you are seeking. Sometimes a pay cut can pay higher dividends in the long run if the new career develops your skill set.

Scenario 3: Knowing When Not to Open a Door

There is no doubt I would have succeeded in both roles and my bank account would have also benefited. But in both cases I would have compromised on other values that meant more to me personally and professionally.

Had I walked through one of the doors, my daughter would not have grown up near her extended family. Additionally, I would have had to travel extensively, taking me away from the most important role in my life … being a mom.

The other role would have put me back in the rigidity of corporate America. While I would have remained in a salaried position, the flexibility that comes with being part of a small company would have been lost.

In both cases, I was not willing to compromise the priorities I have set for my family in order to simply increase my personal bottom line.

Tip #3: Sometimes you have to peek behind a new door to appreciate all that you have already around you. But just because you peek doesn’t mean you have to close the door on where you are right now. Pick new doors wisely.

Most doors in life are only open for a few moments. Yet the decisions we make on how we handle them can impact us for a lifetime. Helen Keller’s words were wise. In order to successfully heed them, you have to know who you are and where you want to go. When I created a list of “Things I Will No Longer Tolerate,” making decisions on which doors to open and which doors to shut became much easier. 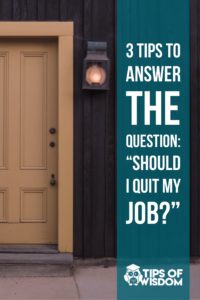