Imagine how different your world would be today if you hadn’t snubbed your nose at things you initially thought sounded “too good to be true”. Life is full of people who pushed the limits – tried the things others dared not to try – and came out on top.

Consider your smartphone. A mere decade ago your friends would’ve called you crazy for saying one tiny box was your calendar, your camera, your calculator, your compass, your email inbox, where you play games, and also your phone. Today that tiny device is not only all those things, it is also something millions around the world can’t live without. And yet the device wouldn’t exist if one man hadn’t had a dream to put a computer in everyone’s pockets.

Forget Being Taught Failure is a Bad Thing

Successful people aren’t afraid to fail. From each failure comes growth, new opportunity, and lessons to succeed. Yet so many people are so afraid to fail, they never take the first step towards success.

When we are born, failure is part of our daily routine. From our first cry to our first words, our language milestones are celebrated. The first time a tiny tot uses grammar wrong in a sentence, we don’t chastise him and say, “I guess he will never master the English language.”

From our first crawl to our first step on wobbly legs, our attempts at walking are captured on camera and shared with the (social media) world. The first time a baby finding out how to use her legs falls over, we don’t laugh at her and say, “I guess she’ll never be a walker.”

Instead, as infants and toddlers, we are taught that practice and effort make us successful.

Then we start school.

We are taught conformity and perfection.

A failing grade means we are punished and unable to participate in extracurricular activities. We learn perfection is the only way to success and if we fail, the world stops cheering for us. An F- on a science test means you’ll never be a doctor, not that you simply have test anxiety and can’t prove on a piece of paper you’ve grasped the knowledge.

By the time we make it into the working world, we are programmed no longer as the infants who celebrate the lessons of life’s failures, but instead as the people who cannot fail for fear of rejection, retaliation, or resentment.

Those who rise above this fear go on to find success. They may fail a thousand times, but they know that on try 1001, their dream just may come true.

5 Ways to Get Over the FEAR Hurdle 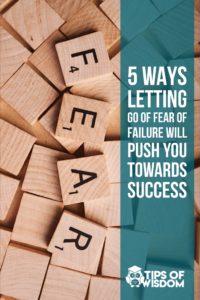 1. Recognize and Admit Your Fear

Perhaps the hardest part of building a dream is admitting the thing stopping you from doing it is your fear of failure. It is so much easier to sit around talking about your plans but never taking action. If you don’t take action, nothing can go wrong. But if nothing ever goes wrong because you never start, the contrary is also true. Nothing can ever go right.

Tip #1: Admit that failure is possible but it won’t stop you from trying. Write yourself a note and look at it daily. It should read, “You were born to do great things. Get out there and do them.”

2. Map Out Your Dream

Who cares if you don’t know where to start. Plans can be changed. The important part is that you create a plan and then hold yourself accountable to acting on it.

Many people’s dreams die in the planning stage. They get brave enough to write their plan, but they spend so much time planning it (and replanning it) that they never start. Again, they feel safer staying in the planning zone than they do starting. If it’s only a written plan, you can’t fail. But the contrary is still true. If you never take action, you’ll never succeed.

Make a commitment to do one thing every single day to get you closer to your dreams. That may mean getting up at 4:00 a.m. instead of 6:30 a.m. It may mean staying up after everyone else goes to bed. Success doesn’t come easy, but it does come to those who persevere.

Tip #2: Map out your dream with dates and then take action every single day.

As you grow your dream, you must be careful who you share your dreams with. Your closest family and friends, who love you to pieces, may not understand why you’re doing something so odd. They don’t want to see you fail, so they will encourage you to take the safe road.

“Why would you leave a job paying you $50,000 a year with great benefits to start your own business?”

“Other people out there are already doing that. You can’t compete with them.”

They are well intentioned phrases from people who in their hearts only want what is best for you. Remember, they are the same people who confirmed to the rules taught in schools. The same people who are afraid to live their dreams out of fear of failure or uncertainty.

One of my favorite quotes reads, “If you don’t want people to rain on your parade, don’t let them know what street it’s coming down.”

Tip #3: Share your dreams with those who will help you reach them, but be weary of sharing them with well meaning naysayers.

After mapping out a plan and strategically sharing it only with those who are going to help you drive it into action, take action.

Tony Gaskins is famous for saying, “If you don’t build your dreams, someone will hire you to help build theirs.”

The world is not short of great ideas. The world is short of well-intentioned people who actually take action on their intentions. In order to get your dreams out of your head and into the world, you have to take action. Hold yourself accountable to achieving the dates and goals you put into your plan.

Tip #4: Talking about your dreams and taking action on your dreams are not the same thing. Action is the only step that will actually build your dream.

Chasing success isn’t about chasing money. Chasing success is about growing and becoming a better person. The only way to grow is to learn. If the plan you started with is big enough, just imagine the type of person you’ll be once you actually accomplish it.

My life’s motto came from a post-it note I read as a 12 year old:

“Dream to touch the moon. If you fail, at least you’ll be among the stars.”

Tip #5: Don’t be afraid to fail. Failure is simply a mere setback full of lessons designed to shape your future success.

According to Bloomberg, 8 out of 10 entrepreneurs who start businesses fail within the first 18 months. In other words, you only have a 20% chance of being successful if you try to start your own business. But guess how big your chance is if you never start? 0%! Life is too short not to make your mark in the world. Be a 20-percent-er!