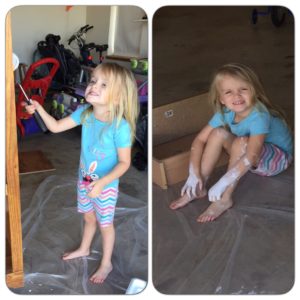 So we decided to let our three year old help us paint an upcycled piece of furniture for her room. We were all having a blast until we realized she was using the Kilz Primer for finger painting and then body painting.

Insert your best “Epic Mom Fail Face” here! That would describe the feeling I felt as she started yelling, “I want to go inside and take a shower. I don’t want the paint on me.”

First we tried washing her off in the water hose, but she’s a little diva. It was too cold, and more importantly, the primer paint wasn’t budging from its caked on state.

So we headed into a warm shower. The warm water made it easy to remove the little bit of Kilz I had managed to get on my arms. Her body, however, was a different story.

“It hurts when you’re rubbing it,” she would complain.

I’m sure it did hurt. There was a lot of scrubbing going on. She’d managed to even get the white paint on her butt. (Nothing surprises me with a toddler anymore). I quickly realized we needed a better solution.

A quick search of Google for “How to remove Kilz from skin” came up with a lot of different options. I decided that using a grinding tool would be considered child abuse, and the idea of using paint thinner or another chemical on my three year old just wasn’t appealing either.

Then I found a solution. It required a little bit of vegetable oil and some dish soap. Luckily we had both on hand. 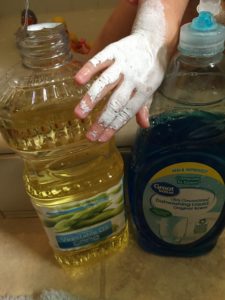 I mixed a handful of vegetable oil with a little bit of dish soap and began lathering up the areas covered in paint. I told my toddler we were turning her into a turkey or a fried chicken. (Cue Chicken Fried by the Zac Brown Band).

Between her realizing she had paint on her butt and thinking she was being turned into a turkey, there were a lot more laughs over the next 15 minutes than there has been previously.

I wish I could tell you the mixture was a complete miracle cure for Kilz on skin. It wasn’t. We still had to scrub a few areas. But it did help immensely reduce the amount of scrubbing. Shortly after applying it, the Kilz started to budge from areas where warm water and a washcloth alone had been unable to complete the job.

In the event you find yourself in the same situation, enlist the help of your faithful kitchen aids to come to the rescue. 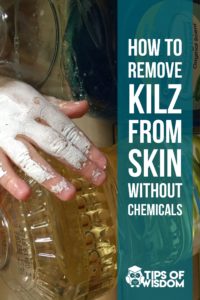