One of the biggest mistakes I made as an untrained manager early on in my career was holding onto the false belief that no one could do it as good as I could. It always appeared on the surface to be easier to just work an extra two hours every day then to put in an extra two weeks training someone how to properly learn a new skill. In time, this poor idea of leadership not only prevented me from growing my team, but it also alienated me from them.

One of the faults of my personality type is that I annoy others by “going like a steamroller”. I have to admit, when I first read those words after undergoing a personality assessment, I was dumbfounded. I had always thought this part of my personality was what had led me to my success. When others stopped working, goofed off, or just didn’t seem to care, I rolled on. I didn’t have time for fun and games. I was on a mission to achieve results. If others were annoyed by my steamroller personality, they could rest assured, I was equally annoyed by their lackadaisical work ethic.

If you’re utterly appalled by that last paragraph, good. You should be.

As I ponder those early days of my career, I am amazed I was allowed to stay in a leadership role. The more I have learned about myself over the last decade, the more I have had to grow. As an introvert, one of my biggest battles on a daily basis is overcoming the fear of rejection. As an intellectual person, I completely understand how utterly silly and unproductive this fear is to harbor. And yet, almost two decades into the real world of adulthood, I find the fear rooted in everything that has kept me from reaching my dreams.

One of the things I learned recently is that same fear is what had held me back as a leader. My eagerness to hold onto projects instead of teaching others has kept me in a safe zone. If I didn’t teach them, they wouldn’t be able to judge my teaching ability.

My inability to not encourage others to stop goofing off for fear they would dislike me, also goes back to that root. Despite being a steamroller at my core, no one really enjoys being known as the office fuddy-duddy!

And you guessed it, that same fear of rejection toot is also tied into the part of my personality that would rather work than socially interact with others. Screw the office Christmas Party, let’s spend eight hours building a new marketing nurture campaign instead….who’s with me?

No one! That’s who is with me.

If any of the above resonates at all with you, you may soon find yourself in a boat on an island with no one around to help you grow. I did, until I made the decision to change.

The Day I Cut the Root, Life Started to Change

Then I became a mom. As I watched my little girl grow up, I realized I no longer wanted to work around the clock. I found new energy in teaching her things, and I realized the only way I could grow and fix my problems was if I cut the root. If I wanted to find success in life, I had to step outside of my comfort zone and grow and teach my work team, too.

I can’t say I’m a perfect leader. There are times when the fears still creep back in. In those moments, I have to remind myself it’s okay to make mistakes. But it’s not okay to hide behind “the root”.

Why? It’s simple. Work life is much more enjoyable when you’re leading a team, instead of pretending to lead one. More importantly, it’s the only way to build a successful company.

You’ll never get the numbers if your people don’t want to work for you.

Those are perhaps the 14 best words to remember as a business LEADER, especially if you’re an introvert by nature. For me, the first step in growing my team has been taking the time to get to know them. In doing so, I have learned a great deal about myself, too.

Our numbers aren’t perfect, but they’re getting better every day. And I know the single best thing I can do as the leader of my team is to create a work environment where they feel valued, while coaching and teaching them to become more than they were when the joined my team. I firmly believe that by doing so, our numbers will soar to heights we never imagined. 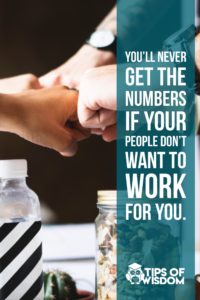