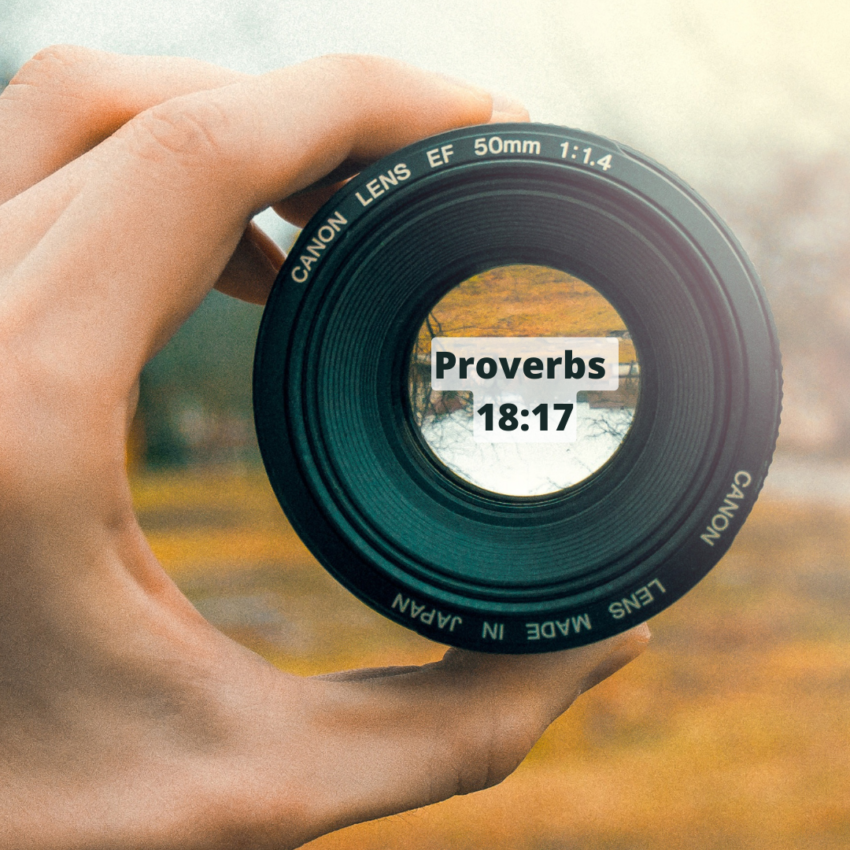 Paul Harvey used to sign off his radio shows with the words, “Now you know…the rest of the story.”

Proverbs 18:17 is a great filter for all things we hear and for reminding us of the need to get “the rest of the story” when we are told stories. It reads, “The one who states his case first seems right, until the other comes and examines him.”

Simply put … there are always at least two sides to every story. Most of the time, there are multiple sides.

We should all be reminded from time to time that when someone tells us a story, they usually tell it from their point of view. Key facts and plot-points are often left out that others involved in the situation can add, changing the entire spin on what was shared.

That is why it’s so important to filter information through all sides before reacting and sharing our thoughts. This filter is needed even more so when we are outsiders to a story being told to us by other outsiders.

Proverbs 18:8 reads, “The words of a gossip are like choice morsels; they go down to the inmost parts.”

Social media is a breading ground for gossip … about people, about churches, about businesses, and about things going on in the community. Social media is often as one-sided as it gets. In just a few sentences and a photo, we immediately begin to often unknowingly formulate our own stories about what we just read.

Recently, I conversed with a person who had seen a few people leave an organization over a course of a few months. He had heard from someone not associated with the organization who had heard from someone else associated with someone in the organization that it was poor leadership driving people away. When asked if he had talked to each person individually, including the people he was accusing of being bad leaders, before sharing his own opinion on the matter, he had not. When asked if he talked with the people at the organization who remained and loved working for the leaders, he had not.

I stopped listening to what he had to say.

Unfortunately, when it comes to matters of people leaving an organization, most leaders aren’t at liberty to give their side of the story because of confidentiality (…and good leaders recognize their side of the story isn’t needed because the truth usually comes out down the road anyway). More often than not, the stories I hear are one-sided and lack the positive parts about what an organization did for the person. Worse yet, one-sided stories only show the bright lights around the person and hide the darker secrets they don’t want the world to know.

How often do you filter the stories you are told before making assumptions, decisions, and public statements about topics you feel called to speak upon?

Recently, I was told by more than one source I was thrown under the bus in a public setting by a friend. When I called the friend directly and asked why, I was told, “I love when people put words into my mouth. That’s not what I said at all.” The person then clarified the statement made and the intentions behind it.

It would have been easy for me to take the one-side of information I had received and been angry and hurt. But I filtered the information through all involved and got a full story.

The next time you feel called to comment on something, to share something you’ve heard, or to pass judgement on a situation, ask yourself if you’ve used the Proverbs 18:17 filter. I’d you haven’t, remember the words of Exodus 23:1 “Do not spread false reports. Do not help a guilty person by being a malicious witness.”

While we are on it, also remember the words of Ephesians 4:29, “Do not let any unwholesome talk come out of your mouths, but only what is helpful for building others up according to their needs, that it may benefit those who listen.”

If what you’re about to post as a comment or say to someone else isn’t designed to build someone up, and if it isn’t based on the entire story, it probably doesn’t need to be said at all.