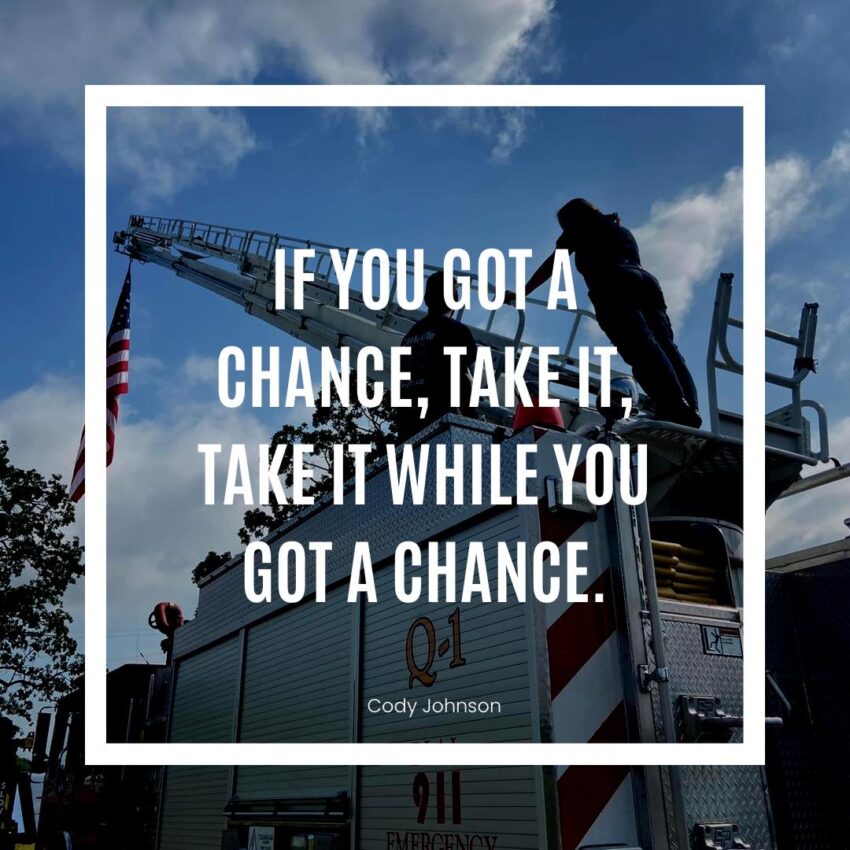 When I first started my career doing public relations for an EMS agency, I was filming an employee spotlight video at one of our stations we shared with a local fire department. The firefighters had recently received a new ladder truck and, in the middle of their training, asked if I wanted to go up the ladder.

Of course I wanted to go up the ladder. How often do you get that chance?

The group didn’t skip a beat getting back to their training, and I went back to filming the video.

Self doubt and fear of what others will think is a dream killer.

Three years later the opportunity presented itself again. This time it was an opportunity to film a funeral procession for a colleague from a unique angle. My fear sorta went away … partly because I wanted to film the best possible farewell video, and partly because I had a firefighter who coached me through it and encouraged me with every single step.

A few months ago, a colleague of mine and I were out at a community event when the fire truck ladder went up to hang the flag. I asked my colleague if she had ever climbed one before. She said she hadn’t and had doubts about being able to do so.

So I went up to the firefighter and asked if he’d let us give it a go. He said, “Absolutely!”

I went first to show her it was possible, no matter how slowly one went up. Once again, from the moment I climbed on the truck (pictured), I had a firefighter coaching me through every step and encouraging me all the way to the top. When it was my colleagues turn, we did the same thing for her.

I was lucky … I got a second and a third chance to do something a few years after I’d turned down what I thought in the moment was “the chance of a lifetime” to climb a fire truck ladder.

The difference … the person standing beside me. In the first story, I had a group of people who took my “No” at face value and went on. The second and third time, I had someone who coached me through the fears and encouraged me with every step.

Ever had a chance to sit down with someone debating chasing their dreams, and instead of pushing them to go forward, you simply said, “You’re right … give up. The other path seems easier!”

Ever had a chance to sit down with someone and help them really work through something so they could accomplish their dreams and instead asked them, “Are you really sure this is where you should be?”

Ever been the person on the receiving end of that advice, only later to look back and ask yourself, “What if…?”

Self doubt sucks … but what sucks worse is having a group of people around you who don’t encourage you to grow through perseverance, who don’t tell you not to take the easy route, and who won’t take the time to listen to you and help you work through the doubt so you can shine on the other side of it.

“What have you got to lose if you go for it and fail?”

The answer is absolutely nothing.

In every interview I did as a recruiter, I asked the question, “What does failure mean to you?”

The most common answer given was, “Failure means I gave up on something without learning from it, or I quit without using all of my potential or resources.”

In other words, the most common reason people fail is they quit just shy of the perseverance needed to succeed … or they failed to recognize the lesson they were meant to learn along the journey.

Romans 5:3-5 reads, “Not only so, but we also glory in our sufferings, because we know that suffering produces perseverance; perseverance, character; and character, hope.”

So why not take the chance, give it your all, and in the off chance you don’t hit the success target, redefine the success. Look at who you became because of the journey. Reflect on what went wrong. Then try again.

The world is full of people too scared to tell you to chase your dream. They will water your seed of self doubt and help you ensure you don’t succeed. And the sad part is … they mean well, they love you, and you will believe them. Other times, they are simply in a point of authority and lack the tools needed to inspire you to push on.

Push on! Go for your dream. If you don’t succeed on the way to the top … find a different ladder to climb and a new coach. Enjoy the trials through your perseverance and look back from the other side and be proud of who you became from the journey.

James 1:2-4 reads, “Consider it pure joy, my brothers and sisters, whenever you face trials of many kinds, because you know that the testing of your faith produces perseverance. Let perseverance finish its work so that you may be mature and complete, not lacking anything.”