Many years ago, I made the decision to start work on my Master’s Degree in Marketing.  I was accepted into a program pending three letters of recommendation, including one from my current employer explaining why I was a good candidate for the program.

I quickly secured the first two letters, but my boss at the time was not on board with writing the letter of recommendation for me.  I was heartbroken until he explained his reasoning.

As a successful entrepreneur who had built a portfolio of multiple businesses, and who had also earned a doctorate degree in medicine, he had learned everything about growing businesses from real world experience, mentors, and a life long commitment to reading and studying.

The School of Hard Knocks Provides a Lasting Education

His words to me were something similar to, “You would do great in the program, but I don’t believe the program will serve you.  Stick with me. I will teach you how to grow and run a business. You can only learn so much in a university, and what they teach you is theory written in books by people who have never run a business. Real world experience will make you a successful business owner and marketer.”

In the end, he told me if my dream was really a Master’s degree, he would write the letter.  But I took his advice.  Then I spent the next two years studying internet marketing from mentors, conferences, books, and blogs.  I practiced what I learned and put real money on the line.  Instead of learning theory, I gained experience.  In the process, we built a successful online educational business together, and I learned skills I never would have learned sitting in a college classroom.

Now that I’m in a position where I interview new college graduates, many with Master’s Degrees, I realize my former boss was right.  Knowledge is great, but there is nothing like real world experience to propel you forward.  I do believe a Master’s Degree is important if you are going to work for large corporations who thrive on big-business theory.  But today’s world is full of start-ups and small businesses who need employees too, and those businesses run on a different tank of gas, different budget, and different business hierarchy.  They would love to have someone with a Master’s Degree, but they are looking for someone with experience, too. 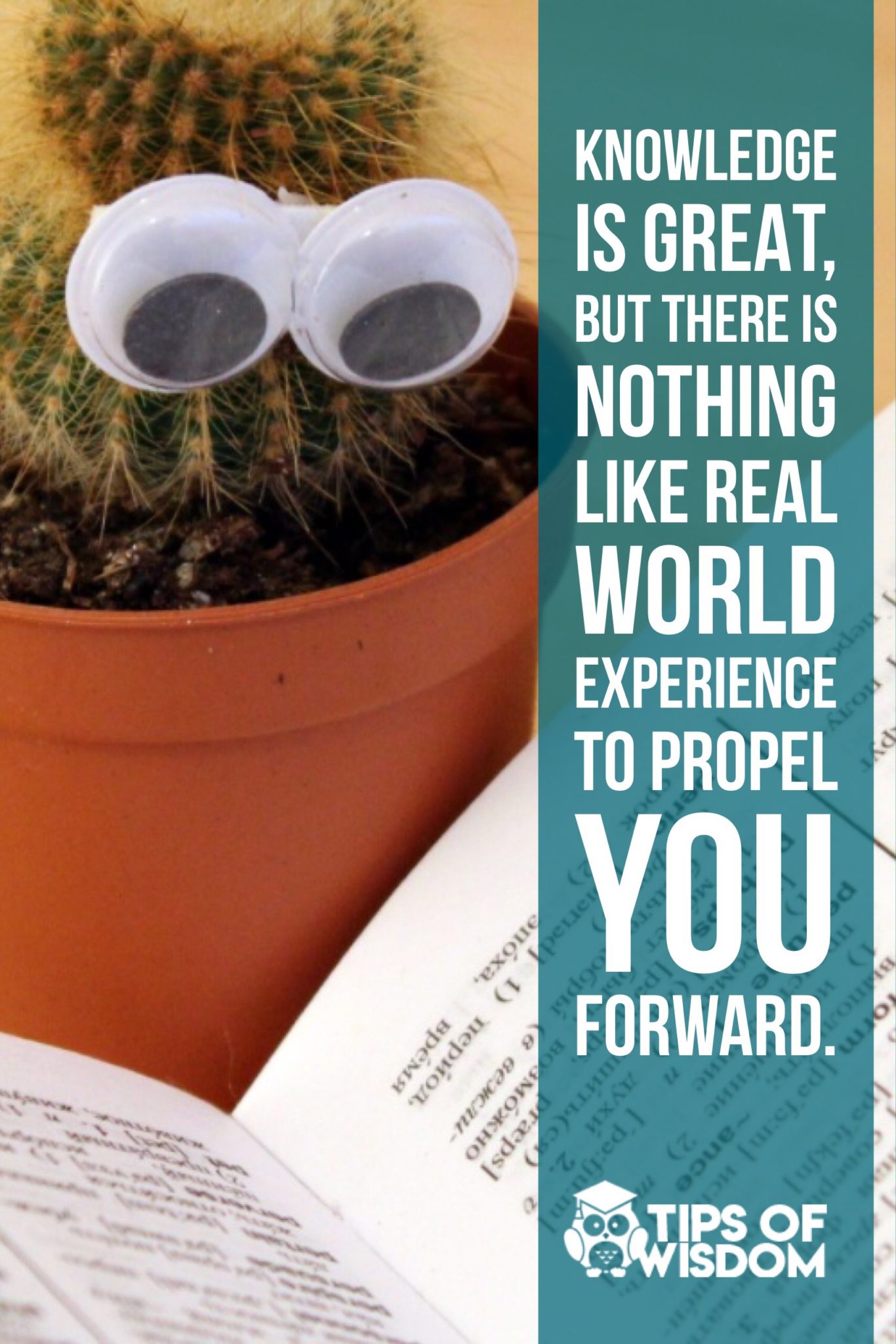 When I first graduated from college, I remember thinking how I was prepared to conquer any job set in front of me.  Within a month of landing my first job as a managing editor of a newspaper with only one other person on the editorial staff, I inherited the entire publication.  The publisher of the newspaper quit to move back to a bigger city, and I spent the next eight months learning every facet of the newspaper business.

In essence, I was my own boss, running someone else’s business.  There was a lot I didn’t know, but I refused to sink.  I kept on swimming and figured it out.  I found multiple people to learn from throughout the town who mentored me and guided me on how the town thought, how the paper had always been run, and how they thought it could be improved.  The key was, I was open to learning from others.

When I left that job out of pure exhaustion for little pay, I doubled my salary, but I didn’t double my responsibility.  I found myself sitting behind a desk, pushing papers and doing basic design work.  I felt unchallenged and stifled.  At times, I felt I knew more than my boss, and I wanted a shot at running the department.  Realizing that would never happen, I took my third job two years later.

It wasn’t until I started my third job, where I was literally on my own to figure out how to build a marketing department from the ground up, that I realized how much I had learned during the first three years of my professional career … and I also realized how little I actually knew.

Again, I found myself finding mentors in the business world to teach me how to become successful in the role I had been hired into.  Many of those mentors I still consult with today, nearly a decade later.

Now I find myself sitting across the desk from eager college graduates as I conduct interviews, and I see a version of myself a decade ago.  With no job experience on their plate, they tell me how eager they are to join the marketing department and start implementing new strategies.  But outside of theory, they are unable to give examples of their strategies.

I recently asked a candidate, “What is your biggest fear about the job I just described to you?”

His response was, “I am afraid you’ll realize that I’ve read a lot of books, but I’ve never implemented anything I just told you about.  I am full of a lot of knowledge, but I really don’t know how to put it into practice.  I’ll study it and figure out how to accomplish it though.”

Another graduate I recently interviewed proudly talked about how she had spent two years going to school to get her Associate’s Degree in Graphic Design.  Her resume had highlighted two years of experience in the field as well.  When I asked her to tell me more about the classes she took related to graphics, she had 2 classes related to the field over the course of four semesters.  Her portfolio and skills matched the ability of someone who had taken only two classes in graphic design.

And that is where I think colleges are failing new graduates today.  After spending four to six years working on their degrees, college graduates leave with a lot of fundamentals and very little practical experience.  While fundamentals are a great starting point for a career at large companies, where training budgets and internships are well established, smaller companies (the heart of the American business system) are looking for people who can walk into a role and take it on. 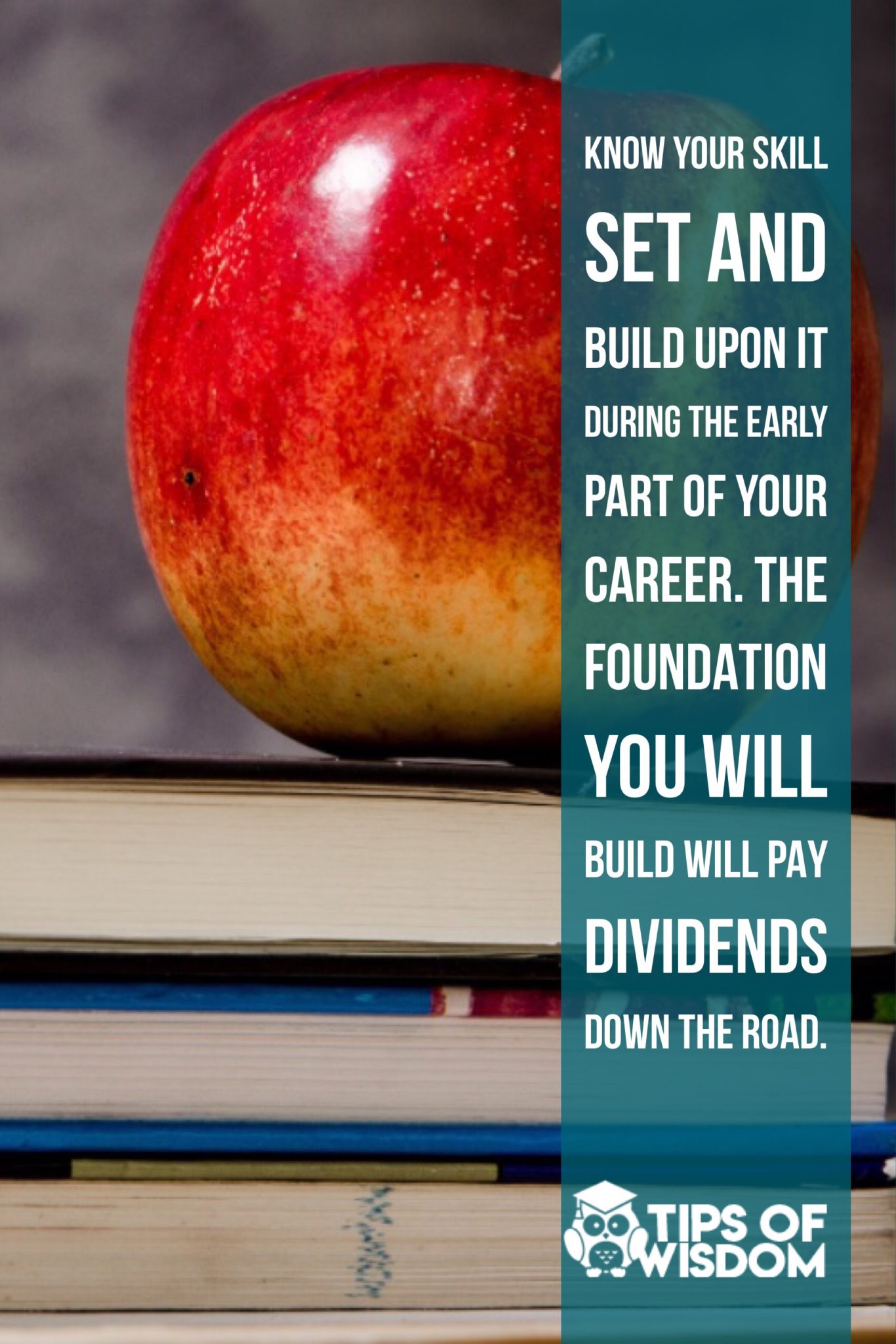 It’s Okay to Start in an Entry Level Position

Since many college graduates aren’t entering the workforce with practical work experience, the one piece of advice I would give them during an interview is this … It’s okay to start in an entry level position.  Know your skill set and build upon it during the early part of your career.  The foundation you will build will pay dividends down the road.

During the time in that position, understand and master each task that has been given to you.  Don’t view it as “data entry” or “minimal”.  View it as a learning opportunity and spend time exploring new ways to do it more efficiently or to add more value to the position.  Ask for new responsibilities once you’ve mastered your current ones, and find a good mentor who will take you under his or her wing and help you grow.

I recently interviewed a new college graduate with six months real world experience doing only one task for a marketing department.  After going through our job posting, including explaining how within two to three months he would be responsible for all aspects of this marketing function including strategy, I asked him what he was most concerned about with the job position.

“It sounds like a lot of data entry, and I am really a strategic person,” was his response.

I asked him to reread the job position we had just gone over, I then asked him to explain how he could enhance the strategy for this part of our department.

“I’m not really sure, but I know I don’t want to do data entry,” was his response.

Data Entry is a part of every job.  In many ways, data is the fundamental part of strategy.  But we will leave the data discussion for another article.

We all have to start somewhere and build our career path from there.  If your dream is to be a marketing strategist, take the time to learn marketing strategy from the ground up.  If you’re not overly excited by the role you have to play in the marketing department that brings you on, start a side business.  Heck, start a side business while you’re still in college and learn marketing and business principles in a real world setting.

The best advice I was ever given is, “You’re the sum of the five people you spend the most time around.”  No matter where you are at in life, make sure a few of those five people are mentors who will help you grow.  That includes finding mentors and jobs that fit the vision of where you want your career to go.

I was speaking with a girl in her early 20’s this weekend.  She was struggling financially but was excited she had just received a new job working at a fitness studio.  I asked her, “What do you want to be ultimately?”

“Then why are you working at a fitness studio?  You need to be working in a healthcare facility, where you can learn from experience and find a nurse mentor to guide you down the nursing school path,” I replied.

Mentors are the quickest path to real world experience.  They have been there and done that.

My best advice to the younger generation just starting their careers is simple … no matter what job you are in, figure out how to do it so well that they need two of you when they promote you to the next role.  In the process, find a mentor to take you under his or her wing.  Ask questions, study, and never underestimate how much you’ll learn in positions you may think are beneath you. 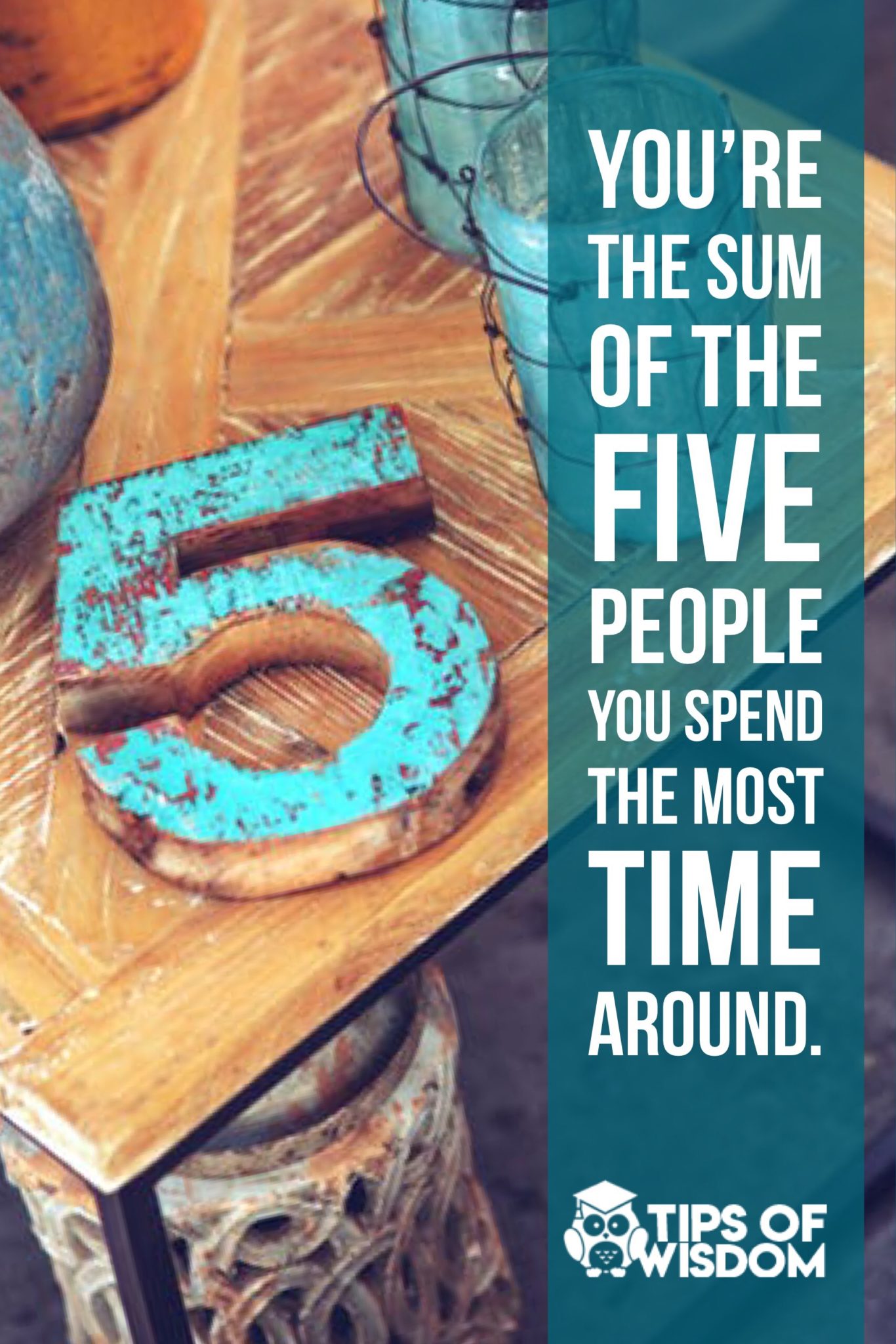