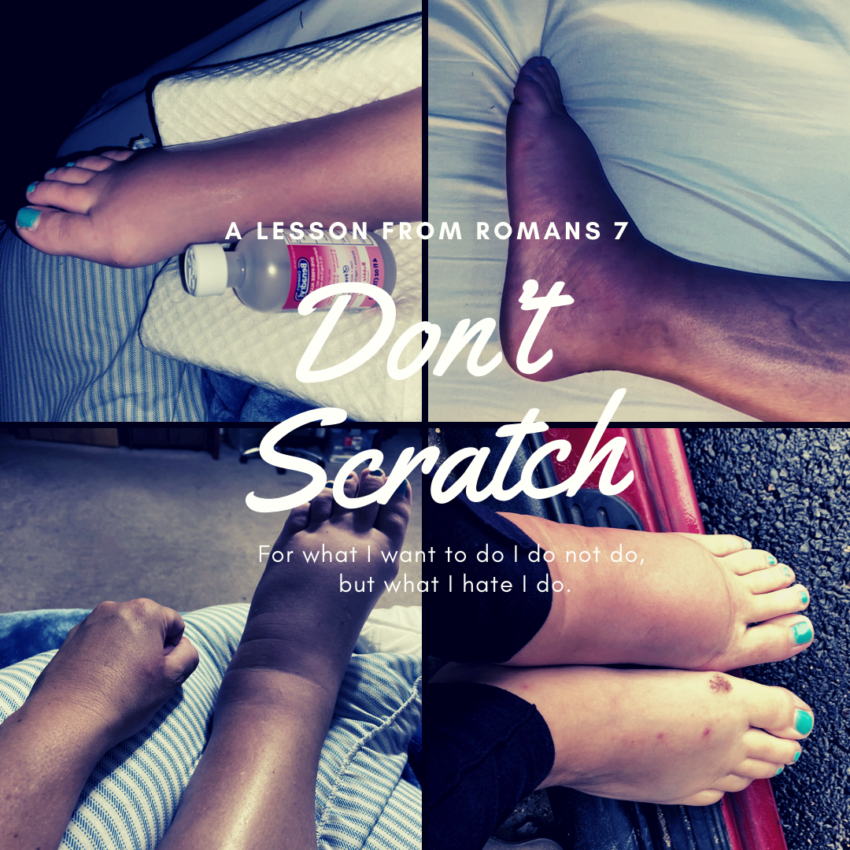 For the last two nights I have managed to wake myself up around 2:00 a.m. compliments of my hand scratching my swollen foot before I am awake enough to stop it from fighting with the histamines that are fighting with the melittin from the bee venom in my body.

🐝 + 🦶 = 😣
Like any good patient in the 21st century, I have turned to Dr. Google for advice on what to expect and how to ease the discomfort caused by a honeybee sting to my left foot.

“The most important thing is to not scratch the sting area. …While the itch can be infuriating, it’s also a signal that your body is fighting the ‘enemy’.”

It seems like such simple advice. A little daunting when I realize the swelling will continue to get worse for a total of 48-hours and the itching and accompanying pain can linger for up to 10 days.

But that’s manageable. There’s an end in sight. And it’s really just “mind over matter”, right? If only my hands would get the memo not to scratch in my state of unconsciousness when the Benadryl wears off in the middle of the night, we would be good. But they don’t.

Who am I kidding? More than once, I have also found myself scratching the itch in broad daylight, instead of applying more cream, when the sensation got unbearable. I regretted it later because it only exacerbated the problem.

Yep. My swollen foot is a symbolic reminder of the enemy we fight every single day. The battle between being Christlike or letting the enemy win by choosing sin is real.

Why do I scratch my foot when I know not to do it? I have a desire to do what I know I need to do, but I just can’t seem to stay the course.

“Don’t panic, and don’t think about the pain. The less you think about it, the less you’ll feel it,” is one of the many pieces of advice Dr. Google gave me as I researched how to recover from a bee sting.

Just don’t think about it!

Instead of scratching the itch, find something else to focus on.

Have you ever found yourself ashamed because you’ve repeatedly made the same bad choice, knowing you shouldn’t do it, but unable to get away from the instant gratification it provides … even if the long term prognosis isn’t great from the choice?

My foot should feel better within a week if I let go of the urge to continually scratch it as it heals. But if I keep giving into the urge for a temporary moment of pleasure, I run the risk of creating an infection in the area.

The same is true with sin. The enemy we fight inside us wants us to keep feeding the bee stings in our lives. The urge to scratch them is real, but the temporary relief that caving into them provides isn’t worth the long term consequences that come from each sin.

What bee stings do you have in your life right now that you need to let go of? What itches are you continually scratching that control you in ways they shouldn’t? Ask God for help letting go of the urge to scratch them.