“They grow up too fast, so you can never take too many photos.”  Those are the words I hear repeatedly from total strangers when they see my little girl in public as they recall when their children were small once, too.

I took their advice.  At one point, it was safe to say I was taking around 50 pictures of my daughter a day.  I sometimes wonder why her first sentence was “Hi cat” instead of “Say cheese” or “Smile”.

This week I heard even better advice when someone said, “Fireworks look better when you put your phone down.”

In all fairness, I justified that my daughter loved watching the fireworks replay on my phone.  She truly did.

But this year, as the fireworks shows leading up to the 4th of July happened, I decided to heed the advice I had been given this week and leave my phone in my back pocket.

Do you know what my daughter loved even more … having mom’s full attention as the fireworks lit up the sky in front of us, instead of the phone in my hand.

It dawned on me that if she wanted to watch fireworks on my phone, there were thousands of free firework videos on YouTube.  Heck, there were probably hundreds of them on my phone from past shows we have been to throughout her young life.

Putting the phone down doesn’t just count for fireworks shows.  It counts for special life moments, too.

I also flashed back to our Disney Cruise that we took seven months ago.

“So many people get caught up in trying to take photos here that they miss the magic,” are the words I overheard one of our servers say.

I was guilty again.  I wanted to capture every special moment with my daughter aboard the ship.  In the process, I had become the photographer instead of the mom.

Our kids will grow up, and we will want photos of them to look back on as our memories fade.  But I think they will want more memories made with mom, than memories of mom taking photos.  So tonight, as fireworks light up the sky, put the phone down and enjoy them with your kids. 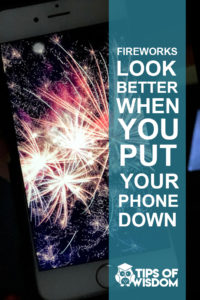