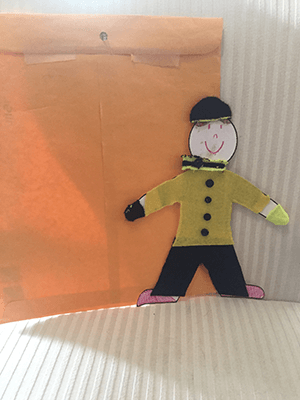 Yesterday evening it finally happened. The big yellow envelope carrying our long lost friend Flat Stanley arrived. He had been studying at a school in Corsicana, Texas with a friend of ours named Hallie. She just knew he would love checking out the sights in Texarkana, so she popped him in an envelope and sent him off to spend a day with us. Below are the letters he wrote her about his experience.

Wow! After traveling 244 miles in the mail, I finally met The Bell Family. They live in a tiny town called Fouke, Arkansas. It’s very country, and in January, it’s also cold here outside. I waited in my envelope on their doorsteps in 30F weather until someone picked me up and brought me inside late in the evening.

I heard a lot of hustle and bustle before I was finally released to meet the family. You can only imagine my excitement when I met the little girl I would get to spend the weekend with. Her name is Em, and after she brushed her teeth, she introduced me to her favorite toy dolls. I was just the right size to help them go shopping at their supermarket, but I was a bit too big to join them for dinner inside the doll house.

Next, I joined Em and her mom for a bedtime story. They didn’t have a book about me, so her mom found one on YouTube. I was just so excited to watch the book on video as Em learned all about me,

Em really wanted me to sleep with her because her mom told her I was only here for the weekend. She is already my new best friend. But her Mom told her that since I was so flat, it would be best to let me sleep in my envelope so I didn’t blow out of the bed or accidentally get chewed by the dog.

I hear we have big things planned for our adventures tomorrow morning around Texarkana. I will let you know how it goes. Thank you for sending me here.

I learned a lot today about the history of Texarkana and what makes this twin city so great. Plus, I got to take my picture with the legendary Boggy Creek Monster in Fouke.

First, did you know that Texarkana was founded in 1873 where two railroads met? I didn’t know that, but lucky for mr, Em loves trains. She often visits the old Union Station building in downtown Texarkana to watch trains and eat a pizza picnic with her family. It was too cold for a picinic during my visit, but we did go watch for trains. Since you won’t fit in an envelope, maybe one day you and I can take a train ride back here to visit Em again!?!

I also learned that there are two Texarkanas. One is Texarkana, Texas and the other is Texarkana, Arkansas. That’s why some people say that Texarkana is “Twice as Nice”. Em took me down the coolest road in town called “Stateline”. The road actually runs down the middle of two states. Then we visited the Federal Courthouse and US Post Office Building on Stateline. Half of the building sits in one state and half sits in the other. Outside there is a fun spot called “Photo Island”, where we got to take a picture and jump back and forth between the two states.

A lot of the town’s history is around the downtown area. There is a train museum, a children’s museum, a regional history museum, and a car museum. There is also the Ace of Club’s House to visit. If we would have had more time, we could have gone inside all of them. But there were too many other things that Em wanted to show me on our big day out.

We did visit the Texarkana Auto Museum, and I got to see a lot of neat old cars. They rotate through the cars that are on display there, and they never charge you to visit. They were very excited Em had brought me to see the museum.

I also learned that the town has four opportunities for higher education. In 1927, Texarkana College (TC) was founded. It is a two year college and the students there are called Bulldogs. Then across town is a beautiful four year university called Texas A&M University – Texarkana (TAMU-T). The students who study there are called Eagles. Em told me she got to visit TAMU-T on Halloween for a free carnavel. Then there is the University of Arkansas Hope-Texarkana (UAHT) and a branch of the University of Arkansas at Little Rock that offers bachelor’s-degree programs on the Texarkana campus of UAHT.

Em’s favorite thing to do in Texarkana is go to the park. They have a lot of parks. Near TAMU-T is Bringle Lake Park. The playground is built in the woods and there are a lot of paved trails. Em likes to bring her scooter and ride on them. It was too chilly today for us to go for a scooter ride, but we did have fun for a bit at the park.

My favorite thing at the park was the free book exchange. Em and I each picked out a book to read. Em’s mom said I could take mine back with me to read with you.

Then Em’s mom had one final surprise for us.

She wanted to take us to Home Depot because the first Saturday of the month is the free Kid’s Workshop. We each had fun building a block calendar for 2018! Emily’s dad helped me build mine, while her mom helper her build her’s. They gave me a pin to show how proud they were that I had made mine. Em has a Home Depot apron full of pins showing all the things she has made. They didn’t have an apron in my size.

I almost forgot. Em also took me to downtown Fouke, Arkansas, where she got to pretend to be the Boggy Creek Monster. He is a legend around here.

In 1972 a man made a movie called The Legend of Boggy Creek. It is a docudrama about the “Fouke Monster”, a Bigfoot-type creature that has been seen in and around Fouke, Arkansas since the 1950s. Em’s mom told us when we are much older we can watch it.

Em’s dad is a pilot. He once flew a film crew for the History Channel around Fouke so they could get footage for a documentary of their own about the legendary monster. 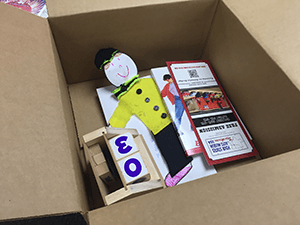 At the Monster Photo Area we found a community rock garden. The sign told us we could take a rock, so Em and I picked out a flower rock for you. We thought you would like it the most.

We were so tired from our adventures that Em and I both took a nap together in the car on the ride home.

I wish we could have seen more during my trip to Texarkana and Fouke. There just is never enough time during the day, and Em really wanted us to go home so we could play. She loves a good game of Hide-N-Seek, and I am just about the best “hider” there is. So I am going to end my letter now and get back to playing with Em.

I can’t wait to see you again and tell your class all about my adventure.

PS: Because it was so cold, Em’s mom made me some warm clothes to bundle up in. She’s not a stylist by any means, but at least I was warm! 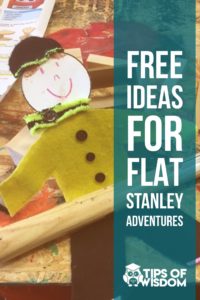