There are a lot of reasons why I recommend Disney Cruise Lines for a family vacation. We enjoyed every minute of our experience. Perhaps my very favorite part of the cruise, however, happened long before we set sail. One of the most magical parts of our cruise was participating in the Fish Extender gift exchange with other people sailing on our cruise. 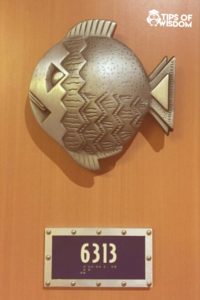 I have to admit, I was nervous when I signed up to participate after reading about it online. I wasn’t sure if it would be overwhelming and expensive to participate in a gift exchange group. At times, I felt a bit overwhelmed as I tried to figure out what to put in our gift exchange bags. Each craft I attempted flopped.

After partaking in my first Disney Cruise, I realized I stressed for nothing. I also realized that by preparing gifts for the exchange, I prolonged the excitement leading up to the cruise. It was almost as much fun crafting and planning gifts as it was giving them and sailing on the ship.

If you’ve already made the decision to participate in a Fish Extender Exchange and your having second thoughts, below are my pointers to keep you motivated. If you haven’t yet joined a group, head on over to Facebook and search for the group that has probably already been created for your sail date.

1. Your Fish Extender Doesn’t Have to Be Expensive

One of the first things you have to decide is how you will collect the gifts you are going to be given. I purchased a pencil bag on clearance for each member of our family and used ribbon to tie the bags together. The entire project cost me less than $10.

Once onboard, I was impressed with the creativity of other sailors. Some people just used one gigantic stocking or bag for their entire family. The most popular style was a baby hanging organizer that people decorated in various ways.

The great news is your Fish Extender bag can be used when you get back home, too. We’ve hung ours by the front door as a place to put keys, gloves, and other things we need on a daily basis.

2. Your Gifts Don’t Have to Be Homemade

Once we decided to participate in a Fish Extender Group, I spent days searching Pinterest and Google Images trying to figure out what to give people. Everything I saw was homemade, so I felt the need to create something homemade, too.

The first several gift ideas I attempted off of Pinterest were epic fails for me. Then I discovered two gift ideas that my toddler could help me make. A bit later, I found a third idea on the Facebook Fish Extender Group.

I probably spent over 40 hours making Fish Extender Gifts in the months leading up to our cruise. Our last set of gifts we completed two days before it was time to set sail.

Our very favorite homemade gift was a pillowcase someone had sewn, followed by a photo frame mat someone had embellished with the ship’s logo and a permanent marker for characters to sign. On the purchased side, we loved the Minnie Mouse photo frame we received and the Olaf Christmas ornament.

3. Your Gifts Don’t Have to Be Expensive or Disney Related

The next thing I kept worrying about was if we had spent enough money on the gifts we were giving. I had decided to do one family gift bag per cabin instead of individual gifts for each person. It made it much easier for me to coordinate.

Most of the gifts we received were “cabin gifts”, too. In all cases, no one spent more than about $10 per cabin gift. I was most impressed with how creative people were in their gift giving.

4. Wait to Give Your Gifts On Long Cruises

We participated in a 7-night Cruise. By night four, we had received the last of our Fish Extender Gifts. Like others in my group, I too had given our gifts out early during the cruise.

Because none of the gifts I have were specifically for use on the cruise, I wished I had waited until the last day of the cruise to deliver our gifts. I think it would have added some extra excitement to everyone’s day after the gifts stopped coming mid-cruise.

There is no right or wrong time to give your gifts. So if your gifts aren’t time sensitive (i.e. Related to Pirate Night or a Beach Day), you might consider waiting to give them until later into your sailing if you’re on a longer cruise.

The one thing I didn’t do was create more than 10 of everything in our Gift Bags. (I created nine for each of the other families and one set for our family).

While I had read about Pixie Dust before embarking on the cruise, I hadn’t really prepared our family to randomly gift people not in our group. Looking back, I wish I would have made 15 of each thing I created, so we could have given out Pixie Dust Gifts, too.

The one thing I did pack extra of were Glow Sticks for Pirate Night. My toddler really enjoyed finding kids who didn’t have any and giving them out while we waited on deck for the show to start.

What is a Fish Extender?

If you’re completely new to the concept of “Fish Extender”, you may wonder why it has such an odd name.

Outside each door on a Disney Cruise ship is a metal fish decoration. At one point I am told the fish was used to hang notes about your day’s itinerary and other information from the cruise director. Those papers are now left in your room during turndown service.

There is an online message board called the DisBoards. My understanding is a group of people on an extended Disney Panama Canal Cruise decided to do a gift exchange, and they hung things from the fish to collect the gifts, and the name “Fish Extender” developed. Since then, the Fish Extender Gift Exchange has become an unofficial part of every Disney Cruise.