Whether you’re planning a vacation to the Bahamas, or you’re planning what excursion to do on your port day in Nassau, one question is bound to pop-up.  Should I visit Dolphin Encounters on Blue Lagoon Island in The Bahamas?  If your answer is yes, below are a few tips I have to help you ensure your experience is perfect.  Because we booked through a cruise, many of the tips are applicable to the cruise experience.

Tip 1: You Must Book Through Disney, Even It’s “Cheaper” Not To 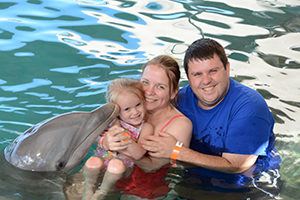 When we booked our Disney Cruise last fall, I couldn’t wait for the day to come when I could book our excursions.  We spent weeks researching different options and reading reviews.  One of the best tips I was given was to not book directly through the cruise line and instead book directly through the vendor.  I was super excited to learn this because when it was finally my turn to book an excursion, they were sold out of Dolphin Encounters at Blue Lagoon Island.  I was bummed.

I called Dolphin Encounters directly because their website was not only cheaper (our toddler was free, instead of $19 through Disney), but it was also still showing availability.  They asked me how we would be arriving, and as soon as I mentioned Disney Cruise, they told me I could only book through Disney.

I visited the Disney Cruise website on a weekly basis to see if an opening would popup.  We lucked out and one day there was a spot for our family.  I booked it, and after doing the experience, I was glad I had done it through the cruise line.  Everything was taken care of for us.  Disney had a place for us to meet on the ship.  The Dolphin Encounters crew escorted us to a ferry, and off we went to Blue Lagoon Island.

While I wouldn’t have had to pay the $19 for my toddler had I attempted to break the rules, I would have spent that money elsewhere on a cab fare to get our family to the island.  Additionally, I would have had a lot more headache.  Save yourself the trouble and book directly through the cruise line if you’re visiting on a cruise.

We booked the first excursion of the day, and I would recommend that for any family coming in on a cruise ship.  While Blue Lagoon Island is small, it is the perfect size beach for a family with small kids.  Once we had finished our dolphin encounter about 10:00 in the morning, we had the remainder of the day to play around on the beach.

One of the things I failed to do on this excursion was grab money or a credit card to pay for the extra things on the island.  For some odd reason, I only took my “Key to the World” card, which can only be used to purchase things on the cruise ship.  Luckily, I did remember to pack sunblock, sand toys, and one drink for my toddler.

If I had the experience to do over again, I would have not only grabbed money, but I would have also made sure to pack snacks and additional drinks.  Had I really been on top of my game, I would have grabbed a few sandwiches the day before from Daisy’s Treats and Eats, stored them in my fridge overnight, and packed them for lunch on the island the next day. 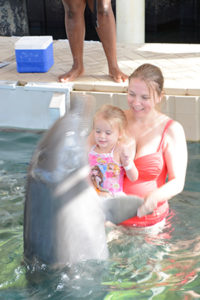 The first thing our toddler was excited about when we pulled into the lagoon was all of the inflatable slides floating out in the water.  Unfortunately, they are only open to people who pay extra money to utilize them.  A lot of older kids spent their entire afternoon playing in this roped off area of the beach.

Here’s the good news.  With a three year old, we had just as much fun playing in the sand, collecting small shells, and splashing in the water.  Once we got to the water, she was fine with the fact that we couldn’t do the inflatables.  We just explained that she was too small (not sure what the height restrictions are), and the rest of the day we had a blast.

Honestly, there are a lot of “included” things to do on the island with older kids that you may not need to purchase access to this area.  Throughout the day they staff at the island hosts events like kayak races and scavenger hunts.

I share this tip only because I wish I would have known ahead of time that there were additional things that cost extra.  It would have allowed us to have the conversation with our child ahead of time of what she would and wouldn’t be able to do on the island.  That is something you may want to research before heading to Blue Lagoon Island.  In the end, it didn’t matter for us that we hadn’t paid for the extra things.  We still had fun. 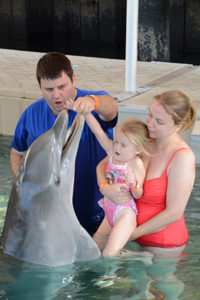 BUT … BUYER BEWARE!  I purchased the photos on December 16th assuming I would be able to download the digital images and video immediately after I purchased them.  This was not the case.  After emailing the “Photo Lab”, I received a response back that it would take 5 days to receive my photos.  Five days came and went, and I reached out to them again.  No response.  I reached out via email multiple times, never receiving a response.  My final email to them came back blocked.

Then I reached out to them via Facebook messenger.  I was told someone would call or email me.  They did not.  I reached out again on Facebook messenger, and two days later, on January 3rd, someone from the island called and helped get me my photos.  So if you do go the route of purchasing your photos online after you leave the island, be prepared to stay on top of the staff to actually send the photos to you.  I truly believe had I not been so persistent, they would have taken the money I paid for the photos and never sent the images.

Good news! The photos that we received were fantastic.  The quality was awesome and the shots they took were great.  I highly commend their photographer.

Bad news. We paid extra so we could also receive the video.  The video we received was lacking in quality.  In many places, the video skipped or just wouldn’t play, and we had to fast forward or skip around to find pieces of the video that did work. Because we paid $137 to purchase the video and all pictures, instead of just $16 a digital download for the few images we did want, I was really disappointed in the video quality.  If we had it to do over again, knowing the quality of the video, I would have just purchased 2 or 3 of the photos.

They have a lot of different things you can participate in, including a dolphin encounter, a dolphin swim, and encounters with sea lions and stingrays.  We only participated in the dolphin encounter because our toddler wasn’t old enough to participate in anything else.  My husband and I have done the dolphin swim in Jamaica, and we enjoyed it.  But our entire family absolutely loved the Dolphin Encounter because we actually got to participate in tricks with the dolphin.  To be honest, there wasn’t a huge different between our “swim” in Jamaica and our “experience” in the Bahamas.  They were just different types of tricks.

I highly recommend the Dolphin Encounter experience, and if you have the option, volunteer to be in the very last family group that goes.  We were in the last family group, and that meant we got to participate longer as spectators.  It also meant we got to watch all of the extra tricks the dolphin did for each family, and then we were the final group with no audience.   If you have a child who is a bit apprehensive to get in the water with the dolphin, going last is also a bonus because they get to watch multiple kids interact with the dolphin before they do.

Tip 5: Don’t Bring Someone to Take Photos for You

To save money, I had read online that many people recommend paying for someone in your group to just be an observer.  Observers can take photos from the dock.  Originally, I had planned to be an observer, so we wouldn’t have to pay money for the photos.  But my husband talked me in to participating in the experience.  I’m glad he did.

The entire dolphin encounter happens where someone can watch you from the dock, but your backs are to them almost the entire time.  This means any photos they took would not capture the facial expressions or most of the actual moments that you’re in the pool.  I highly recommend the entire family participate.  Just plan to pay extra for the photos if you know you’re going to want them.

We were very glad we had spent our port day in the Bahamas at Blue Lagoon Island.  The 40 minute ferry ride from the cruise ship to the island was a tour.  The guide pointed out homes that belonged to various celebrities and other “hot spots” in Nassau, Bahamas.

We were there in December and the water was chilly, but the sun was warm.  The water on the beach is not deep.  We never got more than waist deep anywhere in the swimming area.  My husband was a bit disappointed by this, as he loves to snorkel and explore.  But he still enjoyed swimming in the water, especially once we discovered sponges and shells he could bring back to show my daughter on seashore.

We did not explore anything on the island other than the dolphins, the sea lions, and the beach area. Many people have asked us if we would go back to the island.  We wouldn’t, but only because we don’t ever like to do the same experience twice.  There’s just too much to see in the world.  But if you’ve never been to the Bahamas, and you’re considering a trip to Blue Lagoon Island to swim with the dolphins, I would recommend you go.