The hustle and bustle of Christmas is behind us for another year. The sparkling colorful lights on houses will soon be packed away, and the lines at the stores are no longer full of last minute shoppers. But one line is still drawing attention…

A few days after Christmas a man in Indiana shared a post a friend of his had written. It shared how “sickened” he was to see a woman returning all of her children’s (assumedly) donated gifts. The post encouraged people who donate Christmas gifts to needy children to mark through the barcode so the gifts couldn’t be returned. 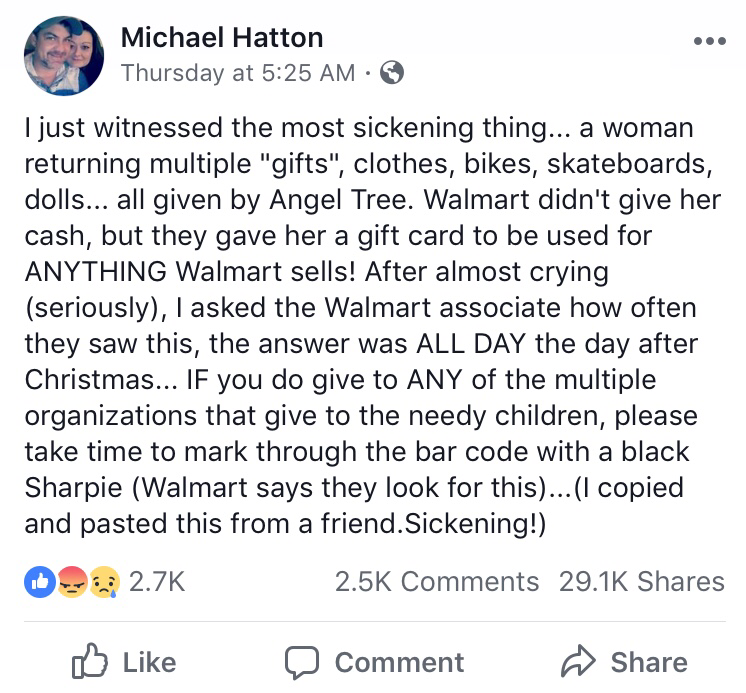 Usually viral posts don’t catch my attention. This one did. So I started reading through the comments and saw where people were saying things like “This is why I never give to Angel Tree”. Hundreds of people were judging the actions of one woman and using one social media post to make a decision about donating to organizations.

My heart broke for the woman who returned her children’s toys.

My heart broke for myself for judging her for doing it without knowing her story.

My heart broke for realizing I wanted to know her story to judge her.

My heart broke for the thousands of people who read the post and decided they would no longer donate to a cause.

I had a flashback to almost 20 years ago. I was sitting in a Sunday School class at a church in Santa Fe, Texas. The youth pastor had just asked us how we would react if a homeless man came into our church, dressed in worn clothing and obviously unclean.

Would we welcome him to sit with our family or silently hope he picked the back row and leave without us having to truly welcome him?

An interesting discussion came out of that question with a group of 14-17 year old Christian kids. The kicker to the original question would change my view of everything we had just discussed.

More on that in a bit.

Next, the youth pastor asked us how many were guilty of pushing the lock button on our car door when we rolled up to an intersection and saw someone begging for money. That sound of “thud” as the lock clicked down being the only impression we left of us for the person in need.

Most of the class said they were guilty of doing that. An anchor on the Houston news station had recently done a huge story about the con artists who panhandle people for money on the sides of the road and return to their lavish homes at night.

The class all mostly agreed that it was not only safer to lock the doors, but it was also smarter to not give to those people. They had organizations they could go to for help. Our conclusion was it was best to assume the beggars were actually not in need and to let someone else take care of them by donating to a worthy charity instead.

Then came the question you would expect growing up in the era of W.W.J.D. bracelets and shirts.

What would Jesus do?

Jesus would give freely what he had to give.

And then came the true lesson.

We were not put here on earth to judge the actions or lives of others. As Christians, our job is to help others and let the love of Christ shine through us.

When we give, we give from the heart in the spirit of Christ. We are judged by Christ for OUR actions.

Should we later learn that someone we gave to was dishonest in their need, that is not our burden to bear. Jesus Christ will judge them, too. In fact, it is only our Heavenly Father who should be judging the hearts of others. Only He truly knows their story.

The youth minister wrapped up his story by sharing why he had asked about the homeless man visiting our church.

You see, his brother had made some wrong decisions in life. He had gone down some wrong paths and found himself homeless and alone.

When his brother finally realized he needed help, he went to a church. He wasn’t welcomed in. He sat alone in the back row and left at the end of the sermon. A congregation had missed their chance at embracing him in the beauty and warmth of God’s love because he was different, an outsider, a begger in need of a bath.

The youth minister had been working hard to invite his brother to visit our church. The minister hoped when that day came, our class would welcome him without judgement.

From that day forward, one of my favorite Christmas songs became Reba’s “The Christmas Guest.”

If you have never heard the song, it is about a man who spends his entire Christmas day waiting on the Lord to come and visit him. Three visitors come that day needing help, but the Lord never appears. As the day comes to a close, the man asks the Lord why he never came.

The Lord replies:
“Three times my shadow crossed your floor
And three times I came to your lonely door.

I was the beggar with bruised, cold feet, and I was the woman you gave something to eat. I was the child on the homeless street.

Three times I knocked, and three times I came in, and each time I found the warmth of a friend. Of all the gifts, love is the best, and I was honored to be your Christmas Guest.”

I am not perfect.

At least once a month I buy breakfast or lunch for a homeless person I see when I drive through a fast food line. Not once have they been unappreciative of the gesture. I used to carry new backpacks with water, $5, fresh socks, jerky, and a Bible to handout when I saw someone in need. I quit doing that years ago when money got tight and I couldn’t pay my own bills.

I never donate to Angel Tree or other organizations, but it’s not because I care what might happen to the toys. It is because I personally know many families who are struggling to pay their bills and provide necessities for their kids, let alone presents. I buy for them instead.

But there may come a day when the only people I know to donate to are the ones hanging on an Angel Tree. I will gladly pick up a tag and a toy and drop it in a donation bin. I won’t mark through the barcode.

You see, it is not my place on this earth to judge the actions of others. It is my place on this earth to show God’s love. There are hundreds of ways to do it. One of those for me is by giving the gift of hope that just may make a child smile on the day celebrating the birth of His son. And if my gift ends up in the return line, that is okay, too. For I know I did my part to show His love to others, and only He has the right to judge how it was received. 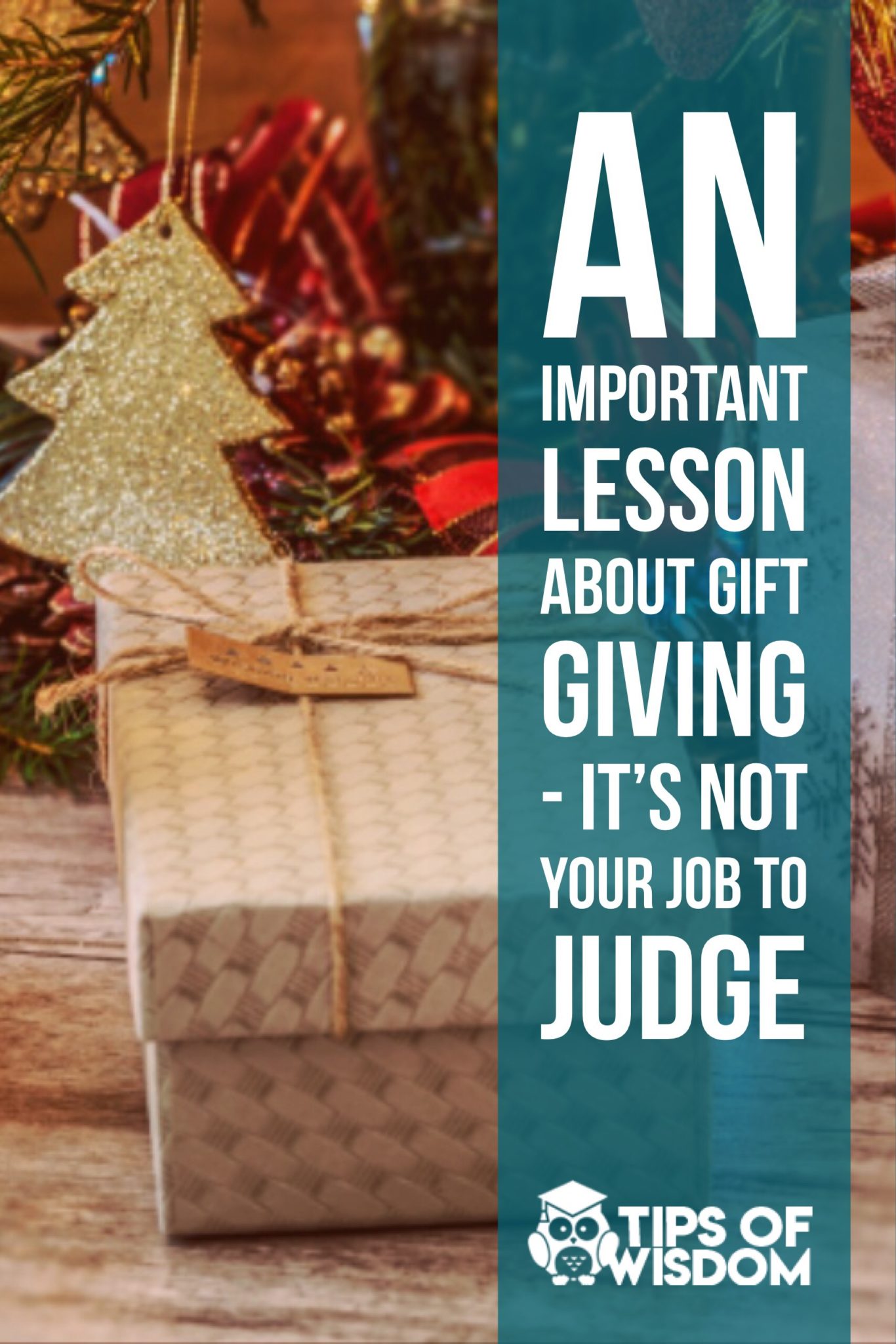