In less than a month we are setting sail on our first Disney Cruise. When I first read about the “Fish Extender” gift exchange, I knew it was something I wanted to participate in. So three months ago, I found our “Cruise Facebook Group” and signed us up to be part of the “Tinkerbell Fish Extender Group”.

My first goal was to create a Fish Extender collector that would hold the goodies other people would bring us. Since most of my Pinterest projects turn out to be flops, I needed something with minimal skill set. I decided to go with pencil bags and ribbons.

My three year old daughter helped me pick out the ribbon. I had hoped she would go for Minnie Mouse ribbon, but she was really insistent that we get the Princess Sofia ribbon. It cost $3.88 for the role and was exactly enough for assembling our Extender.

Next, we headed to the clearance aisle. Since it was the end of August, all of the pencil bags were priced between $0.50 and $2.00. We elected for the cheaper option. We picked out one blue bag for my husband and two pink bags for my daughter and me. Looking back, I wish we would have picked bags to match the ribbon color. But that’s just the OCD in my personality. Our entire family is happy with the finished project and the Fish Extender will still do its job.

When it came time to assemble the project, I used some buttons to help secure the ribbons I was sewing onto the bags. In addition to adding support, the buttons helped hide the fact that I’m a horrible seamstress.

Next, I needed to add some Disney-flare to the bags. I happened to have some extra scrapbook paper in the craft room featuring Mickey and Minnie. I cut it down and hot glued the top of the paper to the inside of each pouch. The thicker scrapbook style paper should be sturdy enough to withstand its upcoming mailbox duties.

Finally, I needed to add our names to the bags. I tried using puff paint but it just didn’t pop the way I wanted it to. So I rummaged around a bit and found some foam letters in the craft drawer. I hot glued our names to the front of each bag, and the letters really made the bags cute. Plus, the mixed colors helped solve the aforementioned OCD issue.

The entire project took me about two hours to complete. 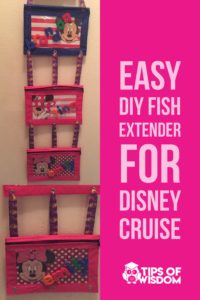 I wish I could say this part went as smooth as I had hoped it would go. Two of my three homemade gift ideas flopped entirely. After spending two months trying to make them work, I started over with a new idea.

I hand painted glass stones to resemble Mickey and Minnie. Then I created tic-tac-toe boards on the back of mini-burlap bags. Each bag needed 5 Minnie and 5 Mickey Mouse pieces.

The idea seemed genius when my daughter and I started on it. About 15 hours worth of effort and a lot of frustration later, I finally accepted the fact that I’m not the most artistic person on the planet. But my daughter loved the gifts we had created, so I decided to end my crafting misery (haha) and remind myself it was truly a gift from the heart.

In addition to the game, I hand decorated gift bags with cutouts from stationary and some puff paint. I was able to make 9 bags for $3 using some bags I picked up at Dollar Tree.

While I was at Dollar Tree, I also found some cute Mickey Mouse door hangers and some insta-flate balloon ornaments. I picked up enough to ensure each family in our group had some extra Christmas decorations for their Merrytime Disney Cruise.

To ensure the bag had a Christmas feel (because we were going on a Merrytime Disney Cruise), I ordered Mickey Mouse Santa charms off of eBay and created one keychain for each family member in the cabin.

Finally, in keeping with our family’s tradition of making applesauce and cinnamon dough ornaments at Christmas, I created each family their own Minnie Mouse Christmas ornament. 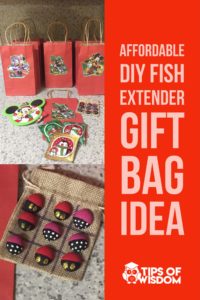 I also joined the Disney Fish Extender Facebook Group in hopes of finding inspiration for new ideas as my dreams of being the ultimate Pinterest Craft-ster died with each failed project. I was amazed at how many people stressed over the quality of the gifts they were giving. “Is this good enough?” was the theme of the board.

Let me tell you, it is easy to get intimidated by some of the things people have created. There are some truly gifted people in this world when it comes to being crafty. But the Fish Extender isn’t about who can give the best gift. It’s about surprising people with a gift they didn’t really expect that came from your heart.

My little tic-tac-toe boards won’t be the gift everyone is bragging about when the leave the ship. But I have a happy three year old daughter who is proud she helped me make them. And she will be proud to deliver the bags and share goodwill. That’s worth every minute of preparation for our first Disney Fish Extender Group. When you find yourself stressing over wanting your gift to be perfect or the best, remind yourself all it has to do is make someone else smile. 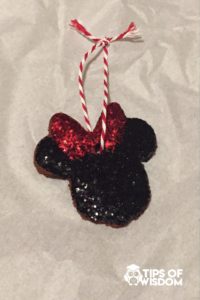 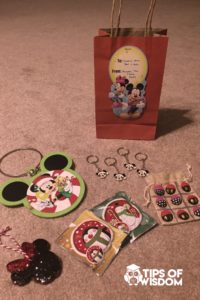