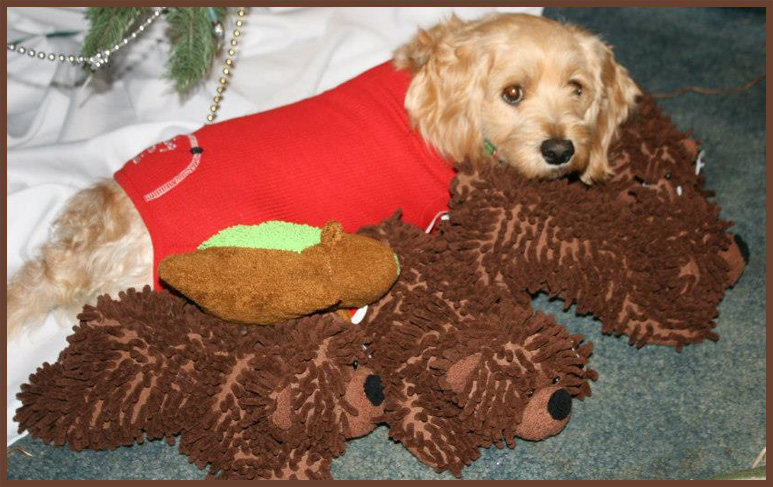 For Christmas I really wanted to get Meg a new Boots & Barkley “porcupine” (her favorite toy).  She received one last Christmas from “Santa”, and she loved it.  In fact, it instantly became her favorite toy.  She played and played and played with it, and within about six months, it was time for a new one.  I bought her a Duck and a Frog made by the same company, but she went thru both of them in only a month, and she never really had the same excitement to play with either.  Finally, I found another “porcupine” in August.  She played with that toy until Christmas Eve this year.  He only had about 1/4 left of his furry little brown “pines” and was getting small holes in him.  Considering all she puts her toys thru, the porcupine is so well made.  🙂

I went to four different Targets trying to locate one (Texarkana, Shreveport, Longview, and Huntsville).  They no longer carried him.

Little did I know, my husband was doing the same thing each time he flew someone somewhere.  He would visit the Targets in those cities trying to find our “baby girl” a new one of her favorite toys to play with.  Not knowing if this would be our last Christmas with her, we both wanted her to have the “present she wanted” under the tree.

I had given up on finding another “porcupine” and I settled for buying her another frog.  She wasn’t excited by the frog.  She insisted on playing with her “porcupine”.  (Yes, I’d given it to her early…about 2 weeks before Christmas)!!  🙂

Brandon didn’t give up.  In early December he realized he too wasn’t going to be able to find the porcupine.  So he sat in the pet aisle at Target and began calling people trying to figure out how to get the porcupine.  After 3 calls (Target Corporate … who gave him Boots & Barkley’s Number, but they only made dog treats … so he called Animal Adventure, the company in small print on the tag) Brandon reached Stephanie at Animal Adventure, the maker of this toy.  They don’t sell to individuals, but after hearing Meg’s story, Stephanie sent Meg FOUR for free!! We learned Meg’s toy is actually a “bear” so they also sent her a real porcupine toy, too!! :).

By far it was the most amazing Christmas gift this year!!! 🙂  When I helped Meg open her toy under the tree and out popped a “porcupine” tears came to my eyes!  It was the most magical Christmas moment.

Thank you Stephanie … and Animal Adventure … for making our “little girl’s” Christmas!  🙂